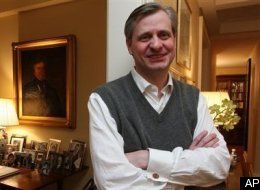 As readers probably know, Jon Meacham, who won a Pulitzer Prize for his 2008 biography of Andrew Jackson, American Lion: Andrew Jackson in the White House, exited as editor of Newsweek in August.  (Newsweek is merging with The Daily Beast.) He is moving to Random House as its executive vice president and executive editor in January 2011. According to the New York Times, “[h]is primary responsibilities will include acquiring and editing nonfiction titles, focusing on history, religion and biography, subjects that Mr. Meacham has explored at length in his own work.”

Meacham plans to write a biography of former president George H.W. Bush, but he hasn’t left Jackson behind. He recently reviewed a new book on Indian removal for the New York Times, in which he captured the essence of Jackson: “Like many great men — Jefferson, Lincoln, Franklin Roosevelt — he left a messy legacy that defies simple explanation or categorization. Politics is rarely logical, and politicians are, at best, flawed logicians.”