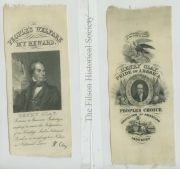 With Richard John on a flight back from China, Gene Smith stepped in to chair the session.

Nancy Isenberg offered a short historiographical survey of the term’s use. Avery Craven traced National Republicans term back to Frederick Jackson Turner; Alexander Saxton used the term in class and racial contexts; Forrest McDonald traced it to Calhoun; and Ed Skeen connected it to the post-War of 1812 era and Monroe. Ultimately, she argued, it was connected to westward expansion, the frontier, and empire building. National Republicanism was a mask for hiding numerous things: sectionalism, anti-southernism, anti-agrarian, class interests, to name the most important. For that reason, the word “National” is imprecise and vague. Isenberg also noted Saxton’s argument that Adams had to embrace the West to cover up his father’s Federalism. She asked whether National Republicans embraced non-formal politics? (An interesting anecdote: Norman K. Risjord published textbooks out of his garage while Isenberg at Wisconsin. I’m not sure if she meant literally out of his garage, but the image was quite humorous.)

Jim Broussard urged the audience to distinguish between National Republicans and Republican nationalists—supporters of post-War of 1812 economic reforms. He suggested that about six congressmen (both pro- and anti- voted for and against all three major 1816 reforms (the 2nd Bank, the tariff, and internal improvements). He also argued that individuals’ 1810s views don’t necessarily indicate where they ended up. Broussard also correctly argued that the Panic of 1819 was one of most overlooked and understudied events of period to determine what happened politically. Finally, he made an important recommendation that historians need to examine the state level (governors and legislatures) to determine the evolution of Jacksonians and their opponents, including the National Republicans.

Dan Preston suggested that understanding the development of national republicanism required examining Monroe’s time in Europe between 1803-07. He wrote Madison and Jefferson about the need for expansive government, esp. military might (i.e., navy, militia). He wanted Republicans, not Federalists, to adopt the program, to keep republicanism safe. He continued the argument through the War of 1812. Preston made an extremely important point that the national attitude toward the presidency changed b/w 1815-30. The office became a national institution, with the relaxing of electoral laws and Monroe’s national tours helping this change. Monroe visited every state except Louisiana, taking the presidency to the people as no one else had to that point.

Channeling Richard John, Sam Watson argued that there was continuity during this time of political change. The continuity came via institution building, particularly with the army and navy.

Gene Smith suggested that the development of slavery and plantation agriculture in the Gulf South produced more factionalized and divisive politics, which harmed national republicanism.

The audience comments were too numerous to capture accurately, but I’ve provided some of the highlights.

Dan Feller offered that historians add party labels retroactively, which confuses the issue. He also offered a nugget from the forthcoming ninth volume of the Jackson papers: Jacksonians were using the Republican, not the Democratic, name. Iin 1831, the only ones using the Democratic label were in Pennsylvanians.

Ratcliffe noted that Crawford supporters used the Democratic label in 1824.

An audience member asked if Clay was the only one to offer a cohesive political system? Isenberg responded that Clay offered a target, so his opponents saw no need to form their own program, when they could just attack his. Ratcliffe stated that the opposition was to the idea of a system, not necessarily individual component pieces.

Another audience member asked what ordinary voters called themselves. Ratcliffe indicated that the 1828 and 1832 elections showed the highest correlation of a voting bloc (Adams/Clay voters) in any election up to the 1960s and that Harrison voters in 1836 were the same bloc as the Adams/Clay voters in 1828 and 1832. Preston also reminded the audience that opponents often assigned party labels.