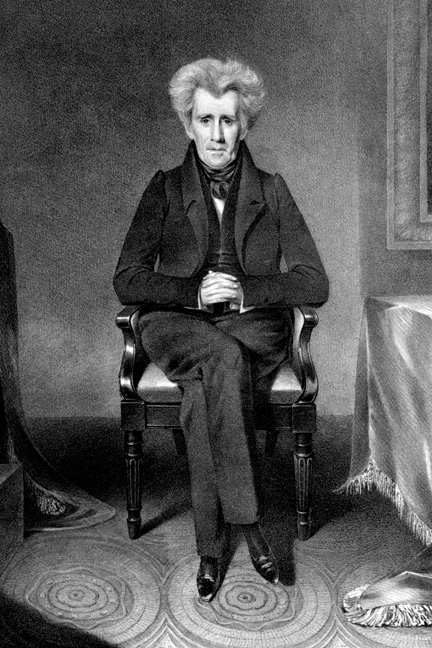 The eighth volume of The Papers of Andrew Jackson is scheduled for publication later this month. Dr. Laura-Eve Moss, Associate Research Professor at the University of Tennessee and Associate Editor of The Papers of Andrew Jackson series, graciously agreed to answer some questions about the newest volume, which will cover Jackson’s correspondence, state papers, and other important documents from 1830. My thanks to Dr. Moss for the opportunity to offer a sneak preview of the new volume.

Mark Cheathem: What topics take center stage in the newest volume of the Papers of Andrew Jackson?

Laura-Eve Moss: Students of the early republic will recognize several of the major issues drawing Andrew Jackson’s attention in 1830, particularly debates over internal improvements and Indian removal.  Both issues reached turning points at the conclusion of the Congressional session in May: on May 27 Jackson issued his first presidential veto when he rejected the Maysville Road bill, which would have allocated federal money for “local” improvements, while the following day he signed the Indian Removal Act, which authorized the president to negotiate treaties with Indian nations in the established states and territories for an exchange of lands and the Indians’ removal west of the Mississippi.  Removal remained a central issue, as a few months later the Choctaws and Chickasaws signed treaties to cede their land, while the Cherokees remained determined to retain possession and sovereignty over their vast domain in Georgia.  The tensions leading to the nullification crisis and the Bank War are simmering, and Jackson is also concerned with foreign affairs on several fronts, particularly American efforts to reopen trade with the British West Indies and negotiations over boundaries with British Canada and Mexico.  Beginning in May, a major schism occurs between Jackson and Vice President John C. Calhoun over Calhoun’s conduct as Secretary of War during Jackson’s campaign against the Seminoles in Spanish Florida in 1818.  And throughout the year, with ebbs and flows, was continuing controversy over the Eaton affair, the social scandal surrounding the behavior of Margaret “Peggy” Eaton, wife of the Secretary of War.

MC: Was Jackson as obsessed with the Eaton affair as he often seemed?

LM: Absolutely.  That’s not to say that Jackson was so focused on the Eaton affair that he couldn’t get anything else done—the volume clearly shows the many aspects of public business that drew Jackson’s attention in 1830.  But throughout the year we find Jackson defending John and Margaret Eaton to an array of friends and family, working to root out the conspirators he believes are plotting against them, and expressing the deep personal affront he feels at anyone who won’t take his side in the matter.  By early 1830, Jackson had compiled a 93-page manuscript of letters and affidavits related to the Eaton affair, and he was circulating copies among his friends to demonstrate what he considered a vile conspiracy against Mrs. Eaton’s character.  As the year progresses, Jackson persuades himself that John C. Calhoun is responsible for the social ostracization of the Eatons.  He writes blistering letters to friends charging Calhoun with being the secret puppet master behind the affair and “as deceitful as Satan” in his efforts to injure the Eatons, and thereby injure and embarrass Jackson himself.  Perhaps the most notable of these letters is one Jackson wrote to his Nashville friend John C. McLemore on Christmas Day, a 16-page missive that includes lists of those who have proven to be Jackson’s friends, by socializing with the Eatons, as well as the “villains” who used “every abominable slander” to denounce them.

MC: Jackson and his nephew and niece, Andrew and Emily Donelson, had a very tumultuous relationship during this year. What was Jackson’s relationship like with other family members?

LM: Jackson was almost the stereotypical family patriarch, both stern and loving, in dealing with his son, Andrew Jr., his ward Andrew Jackson Hutchings, and the vast extended family of his late wife Rachel Donelson.  Jackson advised his relatives and frequently worried: Was Andrew Jr. being played false by a young lady?  Would Hutchings ever settle down and get a good education?  Why hadn’t great nephew Stockley Hays sent recommendation letters to Washington to shore up his chances for a government appointment?  He also exulted in the joys, like the news that his great nephew Samuel J. Hays and wife Frances welcomed a new son, who they named after Jackson.  His letters were always filled with greetings to family and concern for everyone’s well being—he even expressed delight to learn of the good health of Poll, the parrot he’d gifted to his beloved Rachel in 1827.

It should be noted that one of the reasons Jackson quarreled with Emily and Andrew Donelson is that he thought they were defying his authority as head of their Washington household by not associating with the Eatons as he wished.  Despite their break over the Eaton affair (with Emily remaining in Tennessee rather than returning to Washington in September 1830), he retained cordial relations with Emily and Andrew.  In August he gifted their young son with a mare and her filly, and in October he sent a new dress to Emily’s companion, his great niece Mary Ann Eastin, because, he explained, she had no parents to provide such for her.  While Jackson stood on principle in not allowing the ladies to return to the White House if they wouldn’t follow his dictates regarding the Eatons, he missed his absent family and hoped for a speedy reconciliation.

MC: The Indian Removal Act was also passed in 1830. What or who influenced Jackson’s support for this legislation?

LM: By the time of Jackson’s election to the presidency, he was already fully persuaded that the Indian populations had to move west or assimilate, a stance that’s evident from the early days of his administration.  In spring 1829, for example, he sent talks to the Creeks and Cherokees declaring that he had no authority to protect them from the governments of the states in which they resided, and promised federal protection only if they removed west, a theme repeated in his first annual message in December 1829.  Though specifics vary, most historians agree that Jackson’s commitment to Indian removal developed and had solidified by the 1810s, growing out of a determination to remove Indian threats on the southern frontier.  At the same time, Jackson seemed genuinely to believe that if Indian cultures were to survive at all, it could not be within the realm of a surrounding white population.  This sentiment was perhaps more a happy coincidence than a primary motivating factor for Jackson’s support of removal, but he nonetheless seemed sincere on this point.  Jackson had two staunch allies within his Cabinet to help shape the removal policy, Secretary of War John Eaton (of Tennessee) and Attorney General John M. Berrien (of Georgia).  While Jackson sometimes commented on Congressional debates over the Indian removal bill (noting with disdain, for example, that Tennessee Congressman Davy Crockett consistently opposed the measure), there’s little evidence that Jackson himself was an active participant in shaping the legislation.

MC: Were there any papers or correspondence that Jacksonian scholars might be surprised to see?

LM: I think there will be several welcome surprises for scholars.  Many of the documents in this volume were located by the project during its search in the 1970s and are not printed in John Spencer Bassett’s Correspondence, so they will be new to people who haven’t looked through the project’s microfilm supplement of documents.  There are also several newly found documents that our editors discovered while working on the volume.  One of the most fascinating of these is Jackson’s version of a treaty for Choctaw removal, a revision of a proposed treaty sent to him in March by Choctaw chiefs Greenwood Leflore and David Folsom.  In May of 1830 Jackson submitted the Choctaw proposal along with his own version to the Senate for consideration, and a search instigated by our editorial staff led to the rediscovery of Jackson’s long-forgotten draft in the National Archives.  Other new documents include drafts of two letters from renowned inventor and engineer John Stevens about investment in naval innovations, and a letter from Massachusetts congressman Edward Everett recommending physician Samuel Gridley Howe to be appointed an American agent to work in Greece.  Another document includes the psalm that Jackson inscribed in the guest book of Washington hostess Julia Tayloe.  Jackson also exchanged a series of letters with William E. Tucker, regretfully denying Tucker’s request for a $20,000 government investment to help perfect his porcelain-making process, but attempting to aid Tucker’s cause by placing his own order for porcelain ware for the Hermitage.

MC: How will this volume change perceptions about Jackson’s second year in the presidency?

LM: The change in perception obviously depends on the point from which one starts.  I don’t want to tire you with a long recitation of Jacksonian historiography, so let me instead give you the image of Jackson that emerges from the documentary record for 1830.  First and foremost, Jackson was actively engaged in public business throughout the year, even during his summer sojourn to Tennessee.  Much of his attention was focused on Indian affairs, and over the course of the year this issue perhaps drew to greatest amount of his attention.  He was also particularly concerned with clarifying the constitutional relationship between the federal and state governments, a theme evident in his veto of the Maysville Road bill, his refusal to block the extension of state jurisdiction over Indian nations within their borders, and his concern over the constitutionality of the Bank of the United States.  As someone who had suffered his own financial setbacks, Jackson was also especially concerned with the government’s fiscal affairs, keeping track of federal expenditures and receipts, even undertaking his own investigations of accounts like those of Miles King, the naval agent at Norfolk who was removed over errors in his books.  He ordered the dispatch of naval vessels, reviewed military courts-martial, considered a myriad of applications for presidential pardons, and appointed numerous government officers.  He met with foreign diplomats in Washington and issued directives for the work of American agents abroad.  In sum, he worked tirelessly (while often complaining to friends of his exhaustion) on the business of his office.

Amidst this work he found time to correspond with his overseer and family and friends in Tennessee regarding management of the Hermitage, including maintaining Rachel’s tomb, setting a breeding schedule for his stock, and making slave purchases.  He also found time to meet with his Cabinet members over the Eaton affair, dictate to them with whom their wives should associate, and write memos to himself about who was invited to whose Washington party.  Jackson became increasingly agitated over attacks on the Eatons when he returned to Tennessee to find that the “combination” organized against them in Washington seemed to be entrenched in his home state, as well, clearly, in Jackson’s mind, a coordinated attack from Washington directed ultimately at himself.  He also stoked the conflict with Calhoun over the latter’s conduct toward Jackson following the 1818 Seminole campaign, perceiving a conspiracy by Calhoun to deliberately mislead him.  Jackson’s paranoia about Calhoun became so severe that he even blamed his vice president for the Choctaw decision to decline to meet with government agents over removal—a decision that, in fact, had no connection whatsoever to Calhoun.  Taking together Jackson’s official business and his more personal affairs, we see by year’s end an image of Jackson as a busy, driven, and at times also a sick and lonely man, supremely confident in the rightness of his opinions and actions, determined to vindicate his behavior while also longing for a speedy respite from his public obligations.