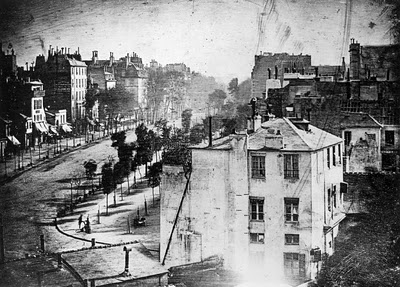 The daguerreotype was the earliest form of photography. (Read some of the history here.) NPR recently posted daguerreotypes of Cincinnati from 1848 that show what may be the first candid photos of humans.

Even more interesting, a blogger named Hokumburg responded to the story with what may the first photograph of humans, taken by Louis-Jacques-Mandé Daguerre himself in 1838. In the photo, a man appears to be having his boots blackened. As the comments section beneath Hokumburg’s post reveals, there seem to be two humans in the photo, not just one: the one having his shoes blackened and the one blackening them.

This photo made me think about visual culture. Specifically, it made me consider how often I miss the details in photos. Do I notice anything other than the people or the object on which the camera was focused? For example, when looking at photos from my childhood, do I see the decor in my aunt’s home? What would it tell someone about her life? What about the people in the background of photos from the trip to the Kansas City Zoo that we took in the mid-1970s, or the workers standing in the background of my photos from the 1982 World’s Fair in Knoxville? Who were those people, and what was going on in their lives as our paths crossed?

Even more thought-provoking, how have digital cameras changed the visual record? We used to be more careful in taking candid shots because of the cost of film and its development, but some of the best preserved candid shots were those undiscovered until the entire roll was developed. Now, we take dozens of shots, delete the bad ones, load them onto our computers, and never print them out. Have we lost something by focusing on quantity over quality? With what type of visual record will future historians have to work?