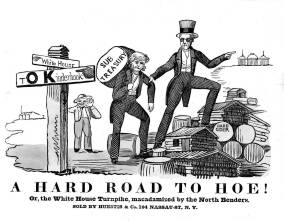 Is “OK” properly written as initials or as a word? What does it mean?

You’ve probably heard at some point that the word “okay” is derived from the initials “O.K.,” which can be traced back to Martin Van Buren’s nickname, “Old Kinderhook.” (Kinderhook was Van Buren’s birthplace in New York, as well as where he retired.) There’s no question that “O.K.” was used in the 1840 presidential campaign, but it seems clear to me that the use of “o.k.” originated earlier. Exactly when, though, is up for dispute. Unfortunately, a new book doesn’t seem to add much understanding about the word’s origin.

In addition to Van Buren, Andrew Jackson has been attached to the origin of this word as well. Supposedly, he spelled “all correct” as “Oll Korrect,” which became “O.K.” He also reportedly used the initials in a 1790 court record, in which he wrote, “Andrew Jackson, Esq., proved a bill of sale from Hugh McGary to Gasper [Kasper] Mansker for a negro man, which was O.K.” (p. 252). A perusal of the volume of Jackson’s legal papers and the first volume of the Papers of Andrew Jackson doesn’t reveal a mention of this usage, but that doesn’t necessarily mean anything, since they don’t address every mention of Jackson in the historical record. A quick scan of several modern Jackson biographies also didn’t turn up a reference to the alleged court record.

Even more interesting is the claim that “O.K.” is derived from the Ulster Scots. Unfortunately, the source for this nugget is Wikipedia, and, wouldn’t you know it, there’s no citation  provided for the claim.

I would be interested in hearing from readers who might know a bit more about this alleged court record or the Ulster Scots theory mentioned by Wikipedia. It’s really just trivia, but the Slate book review linked above piqued my curiosity, and I need something to do while my students sweat through a final exam today.

Update: In the 1960s, Allen Walker Read wrote a series of articles about the word, which he traced back to a Boston newspaper in the late 1830s.