A recent article in the Roanoke Times noted the restoration of the Black Horse Tavern in northern Roanoke County. Part of the reason for the restoration, according to the article, is that “[t]radition asserts that President Andrew Jackson occasionally stayed at the Black Horse Tavern in what is now North Roanoke County when he traveled between his home in Tennessee and Washington.”

Two paragraphs later, however, the reporter acknowledges that the story’s “hook” is actually on shaky ground:

Actually, no one knows for sure if Jackson stayed at the tavern/inn, said owner Frank Longaker, but the 1782 structure was reputed to be a popular stop on what was called the Old Carolina Road. It connected the national capital to Jackson’s home state, via North Carolina, when he was president from 1829 to 1837.

I can’t say for sure that Jackson never stayed at the Black Horse Tavern, but it seems unlikely. I didn’t research every trip, but I can’t recall any occasion on which Jackson took an overland route through Roanoke. The route that Jackson appears to have traveled on most, if not all, occasions was the National Road to Wheeling (now in West Virginia), which connected to the Ohio River. (See map above at The Cumberland Road Project website.) See, for example, his letter to Francis Preston, 16 June 1830 (Papers of Andrew Jackson, 8:376-377), in which he describes taking the Wheeling-Ohio River route. 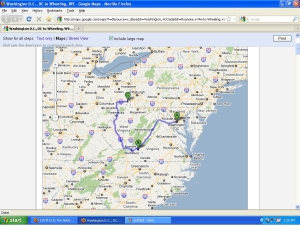 It is possible that Jackson visited Roanoke, since John Randolph, a frequent correspondent during the Nullification Crisis, resided there, but I can’t imagine him dropping down to Roanoke, then going back up to Wheeling. (See the map to the right.) Nor does it make sense that he would go overland through Virginia and East Tennessee on a trip between Nashville and Washington, D.C.

I would welcome thoughts or corrections. This isn’t a particularly important historical question, but it piqued my curiosity.

In doing my research for this post, I came across the “125 M to B: The National Pike and National Road” blog, which contains photographs and stories about the National Road.

2 thoughts on “Did Andrew Jackson Stay at the Black Horse Tavern?”