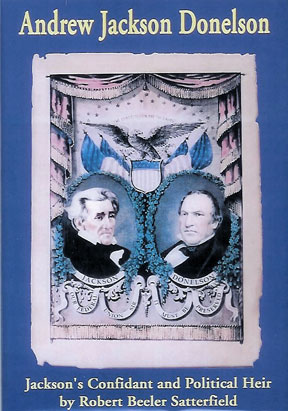 Fellow Tennessee blogger and historical writer Kevin McCann posted a question on the Jacksonian America Facebook page about another Andrew J. Donelson biography. I thought I would answer him here for other interested readers.

The only other published Donelson biography is Robert Beeler Satterfield’s Andrew Jackson Donelson: Jackson’s Confidant and Political Heir. While at Vanderbilt, Satterfield’s advisor, Frank Owsley, Sr., suggested Donelson as a thesis topic. The result was “The Early Public Career of Andrew Jackson Donelson, 1799-1846,” a study of Donelson’s early public life that was completed in 1948. Satterfield then studied under C. Vann Woodward and Charles Barker at Johns Hopkins, where he completed a full-length biography, “Andrew Jackson Donelson: A Moderate Nationalist Jacksonian” in 1961. He taught at Lamar University from 1963-1989, where he overlapped with another prominent southern historian, Ralph A. Wooster. Unfortunately, I never met Satterfield before his death in 2005.

Satterfield’s dissertation was comprehensive in treatment, mining extensively the Donelson papers at the Library of Congress, as well as the Jackson papers and the State Department papers that focused on Donelson’s time in the German states. Satterfield also contributed a fabulous chapter title, “The Stew in the Kitchen Cabinet,” which dealt with the Eaton affair.

As much as I admired Satterfield’s research, his prose was lacking. Reading his dissertation, one can see Donelson as the “moderate nationalist Jacksonian,” but Satterfield never satisfactorily explained why Donelson took his moderate political stance. He also ranged from topic to topic within a chapter, usually failing to offer a unifying thread to pull them together.

The published version of Satterfield’s dissertation appeared via Hickory Tales Publishing in 2000. Shortly after I completed my dissertation in 2002, Hickory Tales editor (and, I presume, owner) Dr. Andrew Jackson Donelson, Jr., sent me a complimentary copy. Yes, you read that right: Dr. Donelson is the great-grandson of THE Andrew Jackson Donelson. Dr. Donelson and I corresponded regularly while I was in graduate school. He was very helpful in sorting out the Donelson genealogical chart, which presents significant challenges, especially with all of the Andrew Jacksons and Rachel Jacksons that populate the various family lines. I haven’t heard from Dr. Donelson since completing my biography, and I’ve often wondered if he was offended by my interpretation of his great-grandfather.

The published edition of Satterfield’s biography does not differ substantively from his dissertation. The title is different, emphasizing the connection between nephew and uncle, but in only a few spots did I see any major textual changes. Another interesting note about the book is that the preface, which does a good job of summarizing Donelson’s importance, was written in 1974. I wonder if Satterfield submitted the dissertation for publication, and it was rejected, or if he revised it and never sent it out for review. Whatever the case, the book is currently out of print, according to the Hickory Tales website. Satterfield also does not appear to have published anything else except for an article on the Tennessee press during the 1830s.

Another prospective biographer, Doug Spence, contacted me after the publication of my 2003 Tennessee Historical Quarterly (THQ) article on Donelson’s role in the 1856 election. Spence is a biology professor at UT Permian Basin, and his faculty bio page shows him to be a prolific publisher and active faculty member. Since the mid-1980s, however, he has been researching Donelson’s life in his spare time. Spence has published two articles on the Donelson family in THQ, but he indicated to me that he does not intend to publish a full-length Donelson biography. I find that unfortunate, since I think having a different perspective on Donelson would be interesting. Spence was very helpful with some specific questions that I had about Donelson, which I still appreciate.

There have been other pieces written on Donelson, and you can find most, if not all, of them in the bibliography of Old Hickory’s Nephew.

Biographical notes on Satterfield taken from his dissertation and Cardinal Cadence, p. 37. Since my correspondence with Donelson and Spence is boxed up in the attic, I relied on my memory for details of the e-mails that we exchanged.