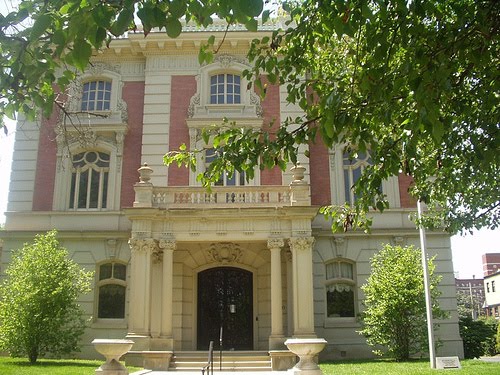 I had the privilege of spending five days at the Filson Historical Society last week. The Filson awards several fellowships and internships; I was the recipient of a one-week Filson Fellowship. If you’re interested in history, you should check out the Filson’s newsmagazine or become a member. At the very least, pay it a visit–you won’t be disappointed.

Before I recap my week, I want to thank the several staff members with whom I worked last week: Jim Holmberg, Jennie Cole, Sarah-Jane Poindexter, Mike Veach, and Robin Wallace. Not only did they do the superb job that one would expect from professional archivists, but they also pointed out new research leads, shared background on the Filson and some of the collections, and discussed challenges that archives face. I also want to acknowledge the assistance of Glenn Crothers, director of research, and Jamie Evans, marketing and public relations coordinator, as well as the individuals who selected me as a fellow. Several of the above-named individuals, as well as other Filson staff members, also suffered through a fumbling presentation of my research, politely chortling at my ill-fated attempts at humor and asking informed and incisive questions that elicited less-than-stellar answers on my part. For the latter questions, I am especially grateful.

My research proposal centered on examining Andrew Jackson and the role of slavery in the presidential election of 1828. In particular, I was looking at accusations about Jackson’s slave trading and slave treatment, which were discussed in Nashville newspapers during the summer of 1828. Andrew Erwin, one of Jackson’s leading Nashville critics, was related to Henry Clay, and I hoped to find similar discussions taking place publicly or privately in Kentucky and the Lower Midwest. Finding the connections would allow me to give a different slant to the campaign, one that would align with the argument by Robert Forbes, Matthew Mason, and others that slavery was a more significant political issue in the 1820s than historians have previously contended. Historical scholarship on the 1828 election barely mentions this issue, so I knew I might not find anything relevant. A lack of evidence, however, would support my argument that the slavery issue in Nashville was the product of a long-standing feud between two kinship networks, pitting Jackson versus Erwin, even if it had no national implications. (As an aside, I’ll also be traveling to the Library of Congress later this summer to look at the prevalence of this issue in national newspapers.)

By now, you’re probably giddy with anticipation about what I found. Most of the week was unsuccessful in tracking down references to my main topic.

(One tip if you use the Filson: Research the collections online before visiting, but prepare to spend some time looking through the card catalog once you’re there. I found a wealth of material not listed in the online catalog.) I did find lots of interesting Jackson-related material that will add flavor to the book manuscript I’m trying to complete this year. For example, I’m still trying to figure out how to use the letter in which the writer, in a nineteenth-century amalgam of Nostradamus, Hal Lindsey, and the Bible Code, claimed Jackson was “The Beast” mentioned in the New Testament book, The Revelation. By Friday, however, I was ready to cede that my search for the slavery material had been thwarted (perhaps by The Beast?!).

Finally, though, I came across something. On three different occasions during the late spring and early summer of 1828, a Kentucky newspaper published editorials and letters recounting the slavery brouhaha in Nashville. Much of the material appears to have been reprinted from the anti-Jackson newspaper in Nashville, but some of it was unfamiliar to me. I’ll have to analyze what I found some more in order to draw conclusions, but I felt a lot better leaving Louisville with this find.

Two final thoughts. First, I love spending time in an archive. My predominantly INTJ personality, combined with my love of history, relishes the opportunity to work a forty-hour week touching letters written decades or centuries ago. I often found myself reading letters about love affairs, family squabbles, spiritualism, etc., none of which had anything to do with Jackson but were hard to ignore. There’s also the shared experience of sitting in a room with others conducting research. The rustle of papers, the creaking of chairs, and the murmur of voices in the next room all add an ambience that reinforces the communality of what seems to outsiders a solitary exercise. (I know, I know–it sounds corny. I guess you had to be there.)

Lastly, my mind is on overload. After returning home last Friday, I had a dream that night that prior to the Missouri Compromise, a young Henry Clay died in a Chappaquiddick-style car accident in a reservoir, requiring his twin brother, Richard, to take his place in the U.S. House. Historians of the Early Republic will recognize some problems with my historical subconscious’ depiction of Harry of the West.

One thought on “My Week at the Filson”