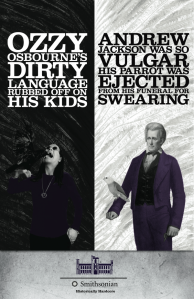 Even though the poster to the left was never actually used in the Smithsonian’s PR campaign, I like it.

Whether it’s true is something else entirely. I told Poll’s story as a docent at The Hermitage years ago and never questioned its validity. This poster made me think twice, so I asked Marsha Mullin, the authority on all things Andrew Jackson at The Hermitage, where the story came from. She directed me to Rev. William Menefee Norment’s recollections, which are in volume 3 of Samuel G. Heiskell’s Andrew Jackson and Early Tennessee History:

Before the sermon and while the crowd was gathering, a wicked parrot that was a household pet, got excited and commenced swearing so loud and long as to disturb the people and had to be carried from the house (54).

It’s a great anecdote, and who am I to question a minister? The story gets even more interesting, though. Norment was one of a group of Cumberland University students who visited Jackson shortly before the former president died. According to one obituary:

There are few, if any, people living to-day who saw Gen. Andrew Jackson in the flesh. Since the death of Judge Nathan Green, of Lebanon, Tenn., a few years ago, Rev. Norment is the only survivor of that little group of students of Cumberland University, that in the spring of 1845 visited “Old Hickory” at his famous country home, the Hermitage, fifteen miles from Nashville. Hear Rev. Norment describe their visit: “Cumberland University is at Lebanon, about fifteen miles from the Hermitage. In the early spring of 1845 six of us Cumberland students decided we wished to meet General Jackson. One Saturday morning we packed our lunches and got in the stage coach, which went near the Hermitage on the way to Nashville. When we arrived, Andrew Jackson Donelson, adopted son of the General, met us and conducted us to the big east room where the General was sitting before the fire. It was a wood fire, and huge logs were burning. The fire-place was about five feet high. Mr. Donelson introduced us to the General as courteously as though we were distinguished guests, and without rising the hero of New Orleans shook hands. At once we saw that the famous man was very feeble. After this introduction, we all sat around the fire. The General puffed occasionally at a short stem silver pipe which he held in his left hand. In his right hand he held a long hickory cane. A Bible lay on the floor beside him. The General was very religious at this time, and when we told him who we were, some of us studying for the ministry, he leaned forward with his chin on his stick and exclaimed: ‘A noble calling, young gentlemen!’ He then advised us to make the most of our opportunities and become upright citizens. To tell the truth, we were rather disappointed because he did not tell us of battles and duels. Could this gentle religious old old gentleman be the man whose ‘By-the-Eternal’ had sounded in the halls of Congress, on the field of battle and dueling ground? Yet we sat looking at the living reality of our boyish dreams, an old man feeble and lonely, who spoke of his wife as ‘that sainted woman,’ and whose grave he daily visited. Up above the mantel-piece hung two long dueling pistols, mute witnesses of days gone by. And I think these pistols occupied most of our attention. We spent more than an hour talking with the General, and when we were ready to leave, he again shook hands and wished us happiness and health” (The Cumberland Presbyterian, 26 February 1920, 9).

The obituary went on to report, “While still at school, word reached Cumberland University that General Jackson was dead. Only six weeks before he had shaken his hand. Rev. Norment says he went to the funeral and that the General’s parrot, excited by the multitude and the wailing of the slaves, let loose perfect gusts of ‘cuss words.’ The Negro slaves of the General were horrified and awed at the bird’s lack of reverence.”

The last quotation is interesting for more than just Poll’s swearing. Norment’s claim that the slaves’ “wailing” set off Poll’s blue streak and that they were “horrified and awed” by the parrot’s “lack of reverence” presents a view of slaves as being more pious than their southern slave owners. That’s an interesting perspective, but it isn’t surprising. White views of African Americans were complicated during and after slavery. Mark Smith‘s How Race Is Made: Slavery, Segregation, and the Senses (2006) offers the simple, yet powerful, argument that southern whites viewed African Americans as dirty and loathsome at the same time that they allowed them in their homes as servants and nannies or, in the case of some white masters and slave women, had sex with them. The same dichotomy holds true for African American morality and religion: Whites believed slaves practiced a heathen African religion (not religions), yet they also thought slaves often possessed a spirituality that gave them greater moral insight and wisdom than their white Christian masters. In the case of Jackson’s funeral, the perception is that Old Hickory’s slaves were appalled by Poll’s language, which she presumably learned from Jackson or other whites on the plantation, because they were too moral to have used that language themselves. 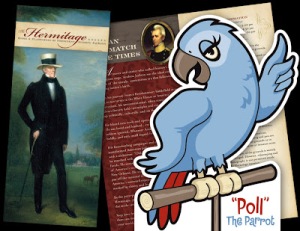 Whatever is true about Poll, rest assured that when you visit The Hermitage with children, the Poll that gives the audio tour for the younger age group does not use profanity. At least, that’s what my children tell me.