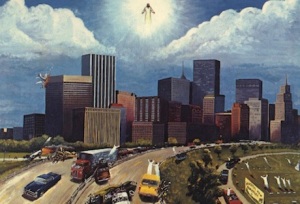 This year marks the anniversary of the Christian cult film A Thief in the Night. In the 1980s, I watched this film and at its sequels during a string of Saturday night showings at Highland Park Baptist Church. The irony of seeing these films, which featured “worldly” dress Christian rocker Larry Norman’s music, at the home church of the fundamentalist Tennessee Temple University escaped me then.

The film had an enormous impact on evangelical culture and shaped its attempts to influence American popular culture more directly through music, film, and books. Religion scholar John Walliss, who has written extensively on the movie and its aftermath, says, “Just as Alfred North Whitehead said that all of philosophy is a footnote to Plato, so we might say that all of evangelical Christian film is a footnote to A Thief in the Night.” This film inspired people from across the political and social spectrum. Marilyn Manson, who like so many saw the film at church as a child, wrote in his autobiography The Long Road Out of Hell, “I was thoroughly terrified by the idea of the end of the world and the Antichrist. So I became obsessed with it, watching movies like … A Thief in the Night, which described very graphically people getting their heads cut off because they hadn’t received 666 tattoos on their forehead.” At the other end of the social spectrum, young Christian filmmakers Peter and Paul LaLonde likewise saw the film as children, and later founded Cloud Ten Pictures, which produced the Left Behind: The Movie, which was adapted from Tim LaHaye and Jerry Jenkins’ massively popular book.

By the way, Frykholm mentioned the Left Behind movies in her piece. Nicholas Cage is reportedly interested in taking over the character of Buck Williams, played by Kirk Cameron in the original Left Behind movie, in a remake. That would make it a disaster movie in more than one way.

2 thoughts on “The 40th Anniversary of Jesus’ Rapture”