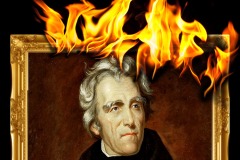 It’s taken me longer than I hoped to respond to this piece by Steve Yoder (h/t John Fea).

Yoder poses an interesting proposition: That the Democratic party should drop its association with Jackson because he was “perhaps the most systematic violator of human rights for America’s nonwhites.” This question of name association is one that is not isolated to Jackson. Consider the recent kerfuffle over Nathan Bedford Forrest Park in Memphis, or other disputes about university residence halls named for KKK members or U.S. military bases named for Confederate generals.

I’m not going to defend Jackson’s actions regarding Native Americans, free blacks, and slaves. My forthcoming biography of Old Hickory makes it clear that he was at the center of creating the antebellum South that privileged plantation society and Manifest Destiny over the rights of minority groups. I do wonder, though, why Thomas Jefferson (who differed little from Jackson regarding slaves, Native Americans, and Manifest Destiny), Franklin D. Roosevelt (whose attitude toward Jews and internment of Japanese Americans belies his progressive credentials), and John F. Kennedy (who was not quite the consistent champion of civil rights that many remember) present better alternatives than Jackson.

Students in my historical methods class are presented with several possible ways to think about history. The moralist view condemns actions in the past, even if they were acceptable at the time. The amoral view argues that moral judgments have no place in historical thinking. The relativist view recognizes the power of moral judgments but also suggests that understanding moral differences in the past allows for the study of change over time. [1]

For example, anyone can rail against Hitler and Nazi Germany, and s/he would certainly be justified. Railing doesn’t accomplish nearly as much, however, as explaining the causes and consequences of Hitler’s reign of terror. And not every historical situation is as clear-cut (to me, at least) as this example.

Back to Yoder’s article, though. In a paper I presented at the 2008 SHEAR conference, I suggested that some scholar needed to explore Jackson’s symbolism for the Democratic party:

My impression is that Jefferson and Jackson were the two symbols of the Democratic party until the mid-twentieth century; while Jefferson still seems to carry symbolic weight for Democrats, Jackson has seemingly disappeared. Examining why Jackson no longer holds resonance for Democrats and how that transformation occurred seems like a fertile area for exploration. [2]

In that paper, I suggested the model of Merrill Peterson’s work on Jefferson and Lincoln for a similar study of Jackson. [3] I’m still convinced that this book needs to be written; it would certainly go a long way to providing historical context for Yoder’s argument.

In case you’re wondering, if I were the Democratic party, I wouldn’t retain the Jefferson-Jackson Day/Dinner name. Just call it what it is: Energize the Base Day. That doesn’t quite have the same ring, though, does it?

[3]. Merrill Peterson, The Jefferson Image in the American Mind (1970) and Lincoln in American Memory (1994). Another work that examines Jackson as a symbol is John William Ward, Andrew Jackson: Symbol for an Age (1962).

One thought on “Should the Democratic Party Dump Andrew Jackson?”