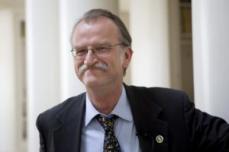 Peter Onuf’s interview at The Junto blog struck a chord with me, and I want to use it to address some things that are implied in his remarks.

(Just to be clear, none of what follows is meant to disparage Onuf in any way. Although I don’t know him personally, I respect his scholarship and his position as the dean of Jeffersonian studies. His interview simply offered me the opportunity to address some attitudes toward MOOCs that continue to bother me.)

The first is Onuf’s identification of one of the oxymorons of MOOCs: lecture vs. interaction. On the one hand, he argues, “I think the performance level among academics is abysmally low, and that more people ought to develop lecturing skills that would merit being, you know, MOOC’ed.” Later, he suggests, “But let’s not make believe that having a bunch of lectures in the can is the sovereign solution to all of our problems in higher education today. My solution, having lots of seminar-tutorial contact, is very expensive, it’s labor-intensive.” And then, near the end, “That people will hold onto the idea that a lecture is some kind of sacred thing—that it’s the essence of our teaching and learning experience—that’s got to be nonsense! I mean, it’s not! And so we have to get over that.” Maybe it’s the structure of the interview, but it appears that he is saying grad students and junior faculty should learn to lecture better in order to contribute to MOOCs, which need to be more like seminars (a contradiction, to say the least).

The tension between lecturing vs. interaction is a major problem that MOOCs have so far failed to address in any meaningful way. Onuf admits that he stayed away from the discussion boards because “it’s embarrassing—it’s about me.” I can imagine that anyone would feel that way, but for a student in a face-to-face course, interaction with the professor is crucial. How much more so for a MOOC, where you are one of hundreds, thousands, or tens of thousands? If a student truly wanted to receive the full benefit of the course, s/he would need to have access to the professor. It’s one thing to lecture, even lecture well–it’s quite another to lead discussions, answer questions, moderate debates, and hold office hours. MOOCs seem inadequate for all of those necessities of a quality education. (For opposing views on peer evaluation, the backbone of MOOC “interaction,” read Jonathan Rees* and Ben Wiggins).

That brings me to the second point about Onuf’s post. He alludes to the threat that MOOCs pose to future professors, including his own grad students. The reality is, MOOCs, as they are conceived by venture capitalists and administrators, are meant to be taught, not by junior faculty who have great performance skills, but by the faculty Rees calls “superprofessors.” In his post, “Every Man His Own Superprofessor,” Rees notes,

what happens to the professors who get left behind? Every man cannot be their own super professor. The world will run out of students first. And as online classes get scaled up and MOOCs get scaled down, all the rest of us will be left as ministers without portfolios.

(See also Rees’ post on the ways in which superprofessors undermine the rest of academia.)

The point is that esteemed history faculty such as Onuf, Jeremy Adelman, and others have the name recognition and the elite-university appointments and resources to produce either full-blown or “boutique” MOOCs. Their jobs are not at stake, either because of where they hold their appointment or, in Onuf’s case, because he is retired.

Most of us don’t have that luxury. We teach at institutions that depend on declining enrollment and languishing endowments to keep the doors open and maintain current faculty lines. Our institutions don’t have the resources to develop a MOOC, which, by Onuf’s estimation, cost at least $100,000 for a short course. Many of us also don’t have the job security that Onuf et al. possess/ed, either because we are adjuncts, we work at institutions without tenure, or our jobs are dependent on financial factors beyond our control. Add to those circumstances the very real threat to future academic employment posed by MOOCs as currently conceived, and it becomes difficult, if not impossible, to see them as anything other than a threat to higher education.

One last point, which seems appropos given Onuf’s Jeffersonian bent: how do MOOCs benefit the less powerful in a democratic society? Historiann had a guest post on this last May, which is worth reading in its entirety for its examination of the ways in which MOOCs contain assumptions about women, racial and ethnic minorities, and the economically disadvantaged. And lest you think this is hyperbole, consider the comment of Daphne Koller, cofounder and co-CEO of MOOC-provider Coursera, last year:

We’re moving into a world where knowledge, base content, is a commodity, which allows anyone who is smart and motivated and passionate to make something of themselves and open doors to opportunity. But at the same time, the much deeper cognitive skills that are taught in the face-to-face interaction—they’re still going to be a differentiator. The best place to acquire those is by coming and getting an education at the best universities.

I happen to like Onuf’s approach to the Jefferson MOOC. He saw it as a way to target adults interested in learning more about Jefferson, not as a replacement for a course on Jefferson. That type of MOOC is a great idea and would require the performance skills that he notes are important. I also agree with his view that historians should be engaging not just each other or our students but the public as well.

The problem, of course, is that Onuf’s situation is not the norm. Administrators don’t want to focus on “boutique” MOOCs–they want MOOCs that will allow them to cut labor costs and increase tuition revenue, all to the detriment of the vast majority of faculty. For all of their rhetoric about democratizing education and saving the world, venture capitalists are interested in making money and/or exercising power, the cost to faculty be damned. That’s what is really at stake.

Fortunately, the MOOC revolution appears to be losing steam, so Luddites like me, who use social media to interact with the public, students, and the profession and instructional technology to help bring knowledge into the classroom, appear to be winning.

* If you haven’t read Rees’ blog, you should. He has been the most consistent faculty advocate, and he provides lots of links to other voices, both pro-MOOC and anti-MOOC.

14 thoughts on “Peter Onuf on MOOCs”