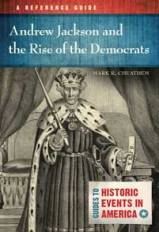 This week, I submitted the index for Andrew Jackson and the Rise of the Democrats, which will be published in March 2015.

I was asked to write this book by the series editor, Randall Miller, while I was completing Andrew Jackson, Southerner. It was an easy transition from one book to the next, since most of the research was similar.*

Because of the target market (undergraduate students), this book won’t draw as much attention from professional historians or the general public, but I think it provides a strong, concise narrative for understanding Early Republic politics and the development of the Jacksonian Democratic party.

One benefit to writing this book was that it forced me to think more deeply about Jackson’s political ideology. Just like his southern identity demonstrated his complexity, Old Hickory’s political ideology wasn’t as straightforward as has often been portrayed.

* If you are interested in my workflow for this book, this document will give you some insight. Or not, depending on how idiosyncratic my organizational thinking strikes you.