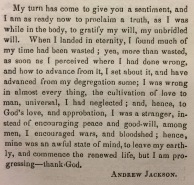 Betsy Phillips at the Nashville Scene has written an interesting piece on nineteenth-century Spiritualism’s treatment of Andrew Jackson. In particular, she noted the claims by Isaac and Amy Post, in their 1852 Voices from the Spirit World, that Jackson told them that he “was wrong in almost every thing” that he did during his lifetime. If you’re like me, you probably find it hard to believe that Old Hickory apologized for anything, even in the afterlife.

(Betsy’s article made me think of another otherworldly Jacksonian experience that I had a few years ago. Someone contacted me and said that they knew of someone who believed that they were the reincarnation of Andrew Jackson Donelson.)

Dead men cannot verify the truth of the words put into their mouths. Which makes the past into something of a puppet show. Or at least makes history at its core a discipline shaped by desire, the desires we have to make sense of what has happened. . . . Voices from the Spirit World is less about the way in which we are haunted by history than about how relentlessly we might haunt the annals of the past, hunt the dead beyond their graves, draw words from their mouths to make meanings of our own circumstances and support our own causes.

Palmieri is absolutely right about the Posts and their fanciful revisionist history. I think we can see the same thing happening with those who compare Donald Trump to Jackson, an idea about which I’ve written previously and which continues to persist. Hopefully, we only have a few more weeks of the Hair Apparent’s nonsense until he goes back to firing C-list celebrities.