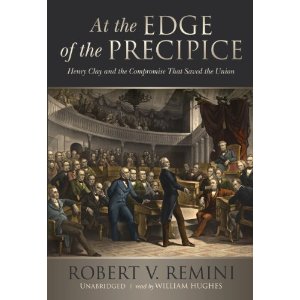 Robert V. Remini is widely regarded as the authoritative historian of the Jacksonian period. His biographies of Andrew Jackson, Henry Clay, and Daniel Webster are monumental works that remain definitive studies of the lives of these three politicians of the Middle Period.

Remini brings his wealth of knowledge about the Early Republic period to his newest book, At the Edge of the Precipice: Henry Clay and the Compromise That Saved the Union (New York: Basic, 2010). This study of the Compromise of 1850 is essentially a micro-biography of Clay during the congressional debates over slavery and territorial expansion that pivotal year. Remini is careful to give Clay both credit and criticism for his work in preventing sectional division and, perhaps, civil war. His well-crafted narrative approach to history is present, lending tension and anticipation to the events of 1850.

Remini subscribes to the “Blundering Generation” thesis in explaining why the Compromise of 1850 succeeded and the nation divided in 1860. Presidents such as Millard Fillmore, Franklin Pierce, and James Buchanan, and politicians such as Jefferson Davis, William H. Seward, and Stephen Douglas simply were not up to par with the Clays, Calhouns, and Websters of the previous generation. In this assessment, Remini ignores the reality that Calhoun did more to lead the nation to civil war than any of those named above, and that  by his own admission, Fillmore and Douglas were key players in helping achieve the 1850 compromise legislation. He argues that the Compromise of 1850 allowed two things to occur that kept the Confederate States from achieving its goal: It allowed the northern states to modernize, thus giving them a technological and military advantage during the Civil War; and it provided the nation time to find its political savior: Abraham Lincoln.

I have assigned this book in my Fall 2010 Civil War course. Historians familiar with the period will not find anything new in the book, but undergraduate students should find it an interesting and insightful read.