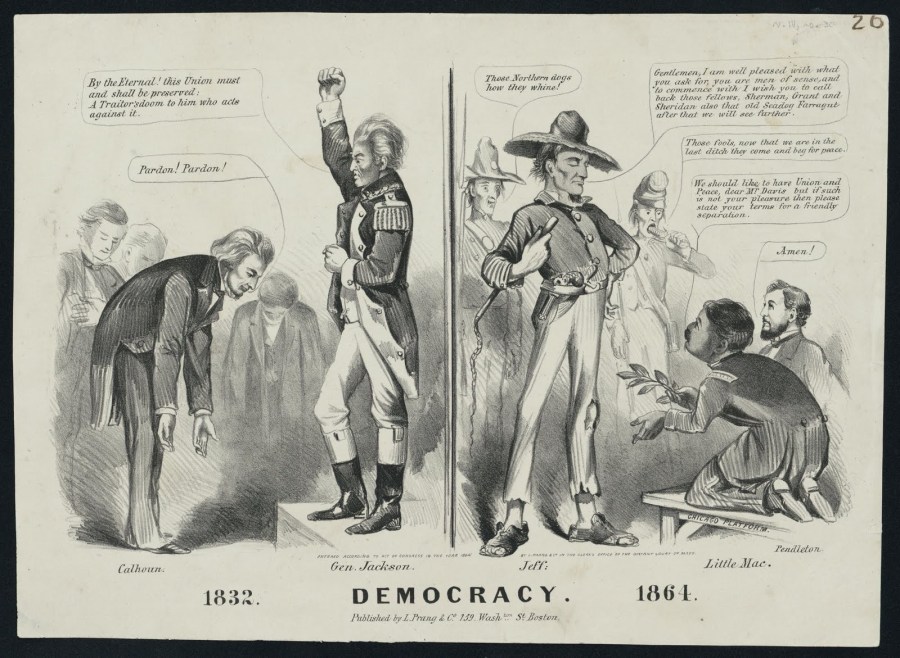 As I was writing the chapter on the 1832-33 nullification crisis recently, I came across a reminder that I had written to myself to read W. Kirk Wood’s article, “In Defense of the Republic: John C. Calhoun and State Interposition in South Carolina, 1776-1833.” [1] Wood is/was a professor of history at Alabama State University and the author of Nullification, A Constitutional History, 1776-1833, 3 vols. (University Press of America, 2008, 2009, forthcoming). [2] Wood’s work on nullification has been praised by Clyde Wilson, formerly a professor of history at the University of South Carolina and editor of the Papers of John C. Calhoun.

Wood locates nullification within classical republicanism in the Early Republic and argues that Calhoun saw nullification, or “state interposition,” as he preferred, as “a conservative principle aimed at preserving the sacred division of powers in the Constitution itself” (23). This viewpoint echoes that of historians Pauline Maier and J. William Harris, among others.

What struck me about this article was the next-to-last paragraph and two footnotes:

Why we believe otherwise, in Nullification’s unconstitutionality, . . . has to do with the emergence of a new national history that accompanied the transformation of the republic between 1815 and 1860. In effect, as the North became liberalized, democratized, and nationalized during the Middle Period, its spokespersons and writers literally reinterpreted the past to make the founders and framers of the republic more democratic, egalitarian, nationalistic, and anti-slavery then [sic] they really were (26).

In his footnote to this paragraph, Wood adds that

the twin myths of democracy (of America being born liberal, democratic, and modern) and a reactionary South . . . were developed before 1860 by Northern writers seeking to legitimize their own revolutionary beliefs while de-legitimizing Southern thought. To do this, historians and others reinterpreted the early national era to be more democratic, egalitarian, nationalistic, capitalistic, and anti-slavery that [sic] it really was (45).

In the next footnote, Wood mentions “[t]he mischaracterization of the South as a ‘slaveocracy’ (by Federalists during the Missouri Compromise) and a Slave Power before the Civil War,” citing works by Eric Foner, Michael Morrison, Ed Ayers, and Linda Kerber (48).

If I’m reading Wood right, he is arguing: 1) northern historians prior to the Civil War produced scholarship (and I use that term recognizing that it doesn’t mean the same as what came later with von Ranke) that deliberately misconstrued the nation’s and the South’s political development; and 2) modern historians continue that tradition by demonizing the South as “a ‘slaveocracy'” and “a Slave Power,” which he believes is inaccurate.

The evidence in support of the antebellum South being a slaveocracy is overwhelming, in my estimation. Certainly, the South wasn’t just comprised of slave owners; in fact, most white southerners didn’t own even one slave. To deny that slavery’s defenders weren’t controlling southern political institutions, however, denies the reality of the institution’s economic, social, and political importance to the region.

Some Internet research turned up a possible explanation for Wood’s view of southern history. He is affiliated with the Abbeville Institute, which describes itself as “an association of scholars in higher education devoted to a critical study of what is true and valuable in the Southern tradition.” Its website notes that it

is not a Southern heritage preservation society, nor is it concerned merely with the history of the region. Its work is more philosophic in nature, namely to explore the metaphysical image of things human and divine to which the Southern tradition bears witness.

Despite this claim, in explaining why the institute was founded, the website states,

American society today is in the grip of an ideological culture war. During the last thirty years, colleges and universities have come to be dominated by the ideologies of multiculturalism and political correctness. The result is that the distinctly Southern interpretation of American history and identity is simply not taught. If the Southern tradition is mentioned at all, it is usually vilified as little more than a mask for racism. In ignoring or eliminating the Southern tradition, much that is good and noble in American life is rendered inexplicable; but perhaps more importantly one erases from memory a valuable intellectual and spiritual resource for exposing and correcting the errors of American modernity.

I would be interested to see what this “Southern tradition,” which contains “much that is good and noble in American life,” constitutes. If it includes a defense of nullification, though, you can count me out.

(2) It’s unclear if Prof. Wood is still at Alabama State. He is not listed in the university directory, so he may be retired.

4 thoughts on “Nullification, the South, and Historiography”