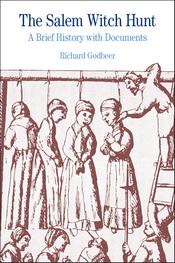 I’m using three new books in my Early U.S. survey courses this fall. I like to assign books that cover a mixture of topics and usually use two that include primary sources.

I’ve been waiting for a short B/SM book on the Salem witch trials for a long time, and it’s finally here. Students usually have some acquaintance with the trials, even if they are inaccurate. I use the trials to get at a number of issues in colonial history, including religion, class, and gender, and Godbeer’s book looks like it will be a good choice.

Masur’s book should be very accessible for undergraduates. Like Godbeer’s book, it covers a number of important issues during the Jacksonian period. Unlike the other two, it does not contain a section of primary sources, but I think it’s important for students to read well-written secondary sources in addition to primary sources.

Vorenberg’s book will allow me to address politics and race during the Civil War period. Students often misunderstand the Proclamation’s intent and are confused about the role of race in Lincoln’s presidency. I’ve used John Hope Franklin’s book on the Proclamation before, but the primary sources in this book serve an important purpose that Franklin’s book did not.

I’m also using Kevin J. Fernlund, ed., Documents for America’s History, Vol. 1: To 1877, 7th. ed. (Bedford/St. Martin’s, 2011). I used the previous edition of this collection of primary sources a couple of years ago but wasn’t satisfied with the structure of the assignment that I gave students. I divided the chapters into three groups and allowed students to write an essay on one choice from each group. Most students waited until the last chapter in each group to write the essay. I’m still not sure how I’m structuring the assignments for this text.