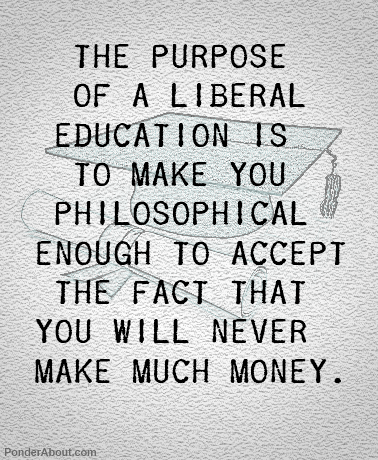 The recent Salon.com article “Is It Time to Kill the Liberal Arts Degree?” sparked an interesting discussion on my personal Facebook page. I argued that employers want graduates who can write well, think critically, and solve problems–all things a liberal arts degree prepares one to do. Others agreed but pointed out that it’s not necessarily an either/or proposition when it comes to college students learning about business, science, or the liberal arts–all are valuable. There were also comments about the insularity of those in the liberal arts, who often see the study of literature, art, or history as the most important end result without considering how to connect it to larger issues outside of academia.

The best rationale for a liberal arts education that I’ve read was written by Bill Cronon, a University of Wisconsin history professor who was harassed with FOIA requests by Republicans earlier this year. (For a different view about those requests, see Jack Shafer’s piece on Salon.com.) Cronon’s list of what constitutes a liberally educated individual is worth the read.

Update (6-22-11): This article on Chronicle.com is an interesting read as well. I like this part of the author’s argument: “Smart, well-educated people do well in this world more often than not, and colleges are in the business of making people smart and well-educated.” Make sure you read the comments section as well.
Update (6-23-11): Someone brought this New Republic article to my attention. In sum, it argues that the hand-wringing about college degrees, especially in the liberal arts, not paying off has been going on for decades.

4 thoughts on “Is The Liberal Arts Degree Still Valuable?”