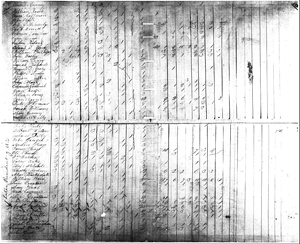 There are times when academic conversations surprise me. The ongoing one on H-SHEAR about the reliability of the Early Republic census is one of those pleasant surprises. SHEARites have offered numerous examples of census inaccuracies and suggested several scholarly sources that discuss this issue. Whether you are interested in political history or community history, this conversation will be useful. After you read the original query by Shelby Balik, go to Nicholas Cox’s post and move forward through the thread of replies.

I think Michael Gagnon summed up the best approach to take to the census:

The census is a best guess, not a scientific study. Don’t expect a
scientific outcome from using data that is collected without systematic
controls. Census data is useful and instructive, but not “true” in the
way social scientists want to use it. As others have noted, it cannot be
reproduced nor systematically verified. Verifications efforts always
demonstrate irregular collection and collation. It is untrustworthy if
you want to crunch numbers and claim either predictive abilities or
accuracy. As a general guideline, the census is not a bad source as long
as you understand the limits under which it was collected.