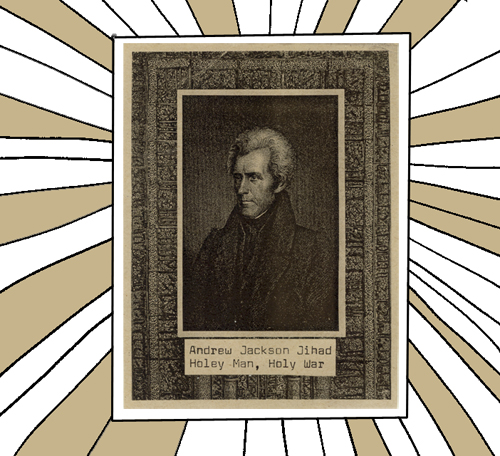 Occasionally, I come across something outside of my interests that piques my curiosity. One such example is Andrew Jackson Jihad. According to the band’s biography on Allmusic.com, Andrew Jackson Jihad “is a folk-punk outfit from Phoenix,” founded in 2004. The two founders, Sean Bonnette and Ben Gallatty, pen “humorously explicit music with macabre themes.”

This group’s music isn’t anywhere close to my tastes, but I wondered what led them to choose their name. A 2009 interview provided the answer. According to Gallaty,

Basically we started the band as an accident sort of. Sean came over and he played a couple songs on acoustic guitar and I booked a show for him at the coffee shop we both worked at and he asked me if I could play. I told him I would only play if I could play my upright bass because I needed to learn how to use it so we played a show and this drummer showed up and was like “Hey, we should be a band!” And we were like “Okay, I guess we’ll do that.” We had another show lined up where we actually had to have a band name and we were on a kick covering the history of Andrew Jackson. We were basically just talking about how gangster he was. Not that he was a cool guy or a bad guy, just check out this story. This guy tried to assassinate Andrew Jackson and the gun didn’t go off correctly so Andrew Jackson came up and started beating him with a stick. There’s all these really weird anecdotes about Andrew Jackson so that was in our thoughts during that whole time period and any punk band adds something offensive and topical to (their name), so there you go. I never anticipated, and I doubt Sean did either, that this band would release albums or we’d ever go on tour. I was in another band and I’d been in that band for a long time and didn’t really have much success. This was kind of a side project thing and then we just kind of started doing it and never changed the band name and it works. I can’t think of anything that would be better.

So,  in the past few months, I’ve learned that Jackson was “sexypants” and “gangster.” I can honestly say that I never saw Jacksonian historiography headed in this direction.